Deprecated: Methods with the same name as their class will not be constructors in a future version of PHP; Twenty_Eleven_Ephemera_Widget has a deprecated constructor in /home/scubaidc/public_html/news/wp-content/themes/scubacat-idc/inc/widgets.php on line 11

Deprecated: The called constructor method for WP_Widget in Twenty_Eleven_Ephemera_Widget is deprecated since version 4.3.0! Use __construct() instead. in /home/scubaidc/public_html/news/wp-includes/functions.php on line 4866
 India | PADI IDC News

After a day on the PADI IDC with Scuba Cat Diving what better way to relax and recap the day than with a traditional Thai Massage. 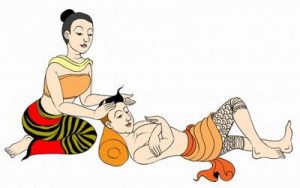 Thailand is renowned for therapeutic massage. It is recognized by the Government as one of the branches of traditional medicine and is regulated accordingly. Thai massage is also practiced and taught by a number of non medical massage technicians in the spa industry within the tourist areas. It is believed that Buddha’s physician, Jivaka Komarabhacca, developed the art of Thai massage over 2500 years ago. It has a combination of influences from India, China and areas of South East Asia. There are regional differences in the art of Thai massage throughout the country. It is known in Thailand as nuat phaen boran, which literally translates to the ancient manner massage. Unfortunately, most of the ancient medical texts were destroyed by the Burmese when they invaded Ayutthia in 1776. Some stone inscriptions survived and in 1832 King Rama III had these placed in the walls of Wat Po where they can still be seen today. 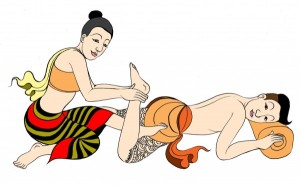 Thai massage is normally conducted on the floor with the recipients wearing loose comfortable clothing to ensure freedom of movement.  No oils are used. The massage itself involves a lot of stretching with deep rhythmic actions. During the course of the massage many yoga like positions are performed. The practitioner leans on the recipient’s body using their hands and straight forearms locked at the elbow to apply firm, rhythmic pressure. The masseuse often uses their feet and legs to do the massage action. It is considered that Thai massage is more energizing and rigorous than more classic forms of massage as it works on the entire muscle-skeletal system of the body. There is a standard procedure to Thai massage, which follows the sen lines of the body. There are over 72,000 energy lines within the body. Ten of these energy lines are major and are known as sen lines. The object of Thai massage is to release any energy blockage within these lines. One of the key features of traditional Thai massage is the blocking and releasing of blood flow known as trigger point therapy. This is when sustained pressure is applied for about 30 seconds where the legs and arms join the torso. Also during the treatment muscle compression, joint mobilization and acupressure techniques are used.  The Thai massage finishes with a mini head massage. The practitioner closes the ears with their fingers for a few seconds and then releases. This is a motion that is designed to bring your mind and thoughts back to the here and now. It is considered a good way to bring you round. 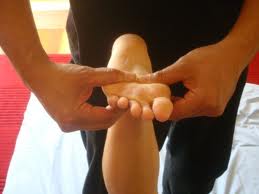 There are many benefits of traditional Thai massage. It is believed to increase energy, relieve and reduce stress, improves circulation, increases flexibility. It also encourages a healthier sleep pattern and centres mind and body. It is also a very effective treatment for back, neck and shoulder pain. However, it is not recommended for people with the following conditions: infectious skin diseases, rash or open wounds, immediately after surgery, immediately after radiation or chemotherapy treatment and people who are prone to blood clots. If you have a heart condition it is recommended that you should see a Doctor before massage therapy.   It is also recommended that a pregnant lady should have a massage performed by a therapist who specializes in pregnancy massage.

Thai massage in recent years has become increasingly popular worldwide. More and more people are realizing the benefits of this ancient traditional massage therapy and are seeking qualifications at prestigious training centres such as Wat Po in Bangkok.