17th June was the date of our first official underwater Clean up of 2012.

A huge THANK YOU to everybody who joined us, well done guys! 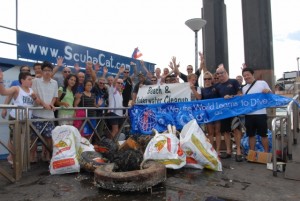 The event was co-ordinated by Scuba Cat Diving’s new Eco Manager “Kiwi”. It was great to see such a turn out, MV Scuba Fun was full to capacity with 25 volunteers to help remove trash from our valuable reef.

We split into 4 teams and quickly kitted up including Lift Bags, Gloves, Sea snips etc

The first dive of the day was to be in Bay 4 of Racha Yai Island… wow what a find, I think the Captain must have known exactly where to drop the teams. We descended straight onto a huge fishing net which we quickly got to work on clearing up. 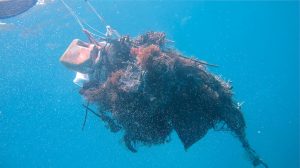 Even the trigger fish left us alone to get on with our work!!!

After lunch on board the boat we decided to move to another bay on Racha Yai Island where all the fishing boats come in to shelter when the sea is rough. This was a great decision, nets, ropes and lines everywhere……………and this site found the strangest find of the day one Wellington Boot! All the debris collected has been registered with Project Aware to help them with their data collection. 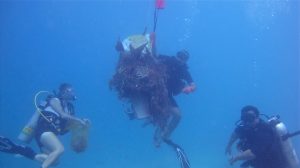 We all dive this Island on a daily basis and it was great to see different PADI Dive Companies from around the Island coming working together for one common aim.

A special thank you to Mr Tee, Phuket Dive Center owner, JP, PADI Course Director and Tony Andrews, PADI Regional Manager for joining us. JP has recently become a PADI Instructor for the Poseidon Rebreather and decided to bring it along for the day. 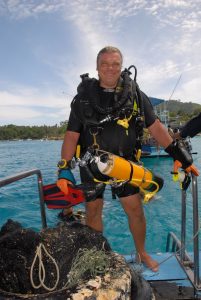 A fantastic day, all be it with lots of hard work was rounded off with a Barbecue on Scuba Cats Roof top terrace in the evening with the Students from Concordia International School celebrating the 5th Anniversary of their Reef Check Survey also at Racha Yai Island.

Stay in touch for details of next months Dive for Debris………….

This month is the 5th Anniversary of Scuba Cat Diving having new ownership.

We have a great Anniversary present for all our customers and so we though we would also do something to help the environment at this special time for us.

So 17th June we will be holding an Underwater Cleanup at Racha Yai Island, all are welcome to join us that day. 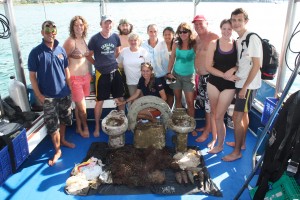 This date was chosen to coincide with another 5th Anniversary happening at that time. 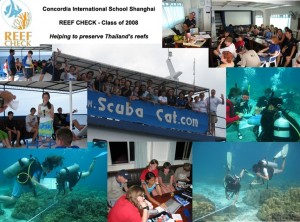 This will be their final day on board MV Scuba Adventure and also be joining us to undertake the clean up before we come back to shore for the Celebration BBQ on our roof top terrace in Patong.

CISS have been conducting Reefcheck Charter’s onboard MV Scuba Cat and MV Scuba Adventure Liveaboards studying the Reef and comparing the results annually, so they can look at the current condition of the reef compared to the results from previous years. 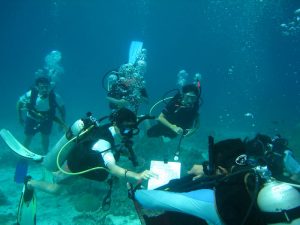 Ranging in age from 12 to 15, these amazing young students collect scientific data along 100 m of Coral reef. After submitting the data to Reef Check, it is added to their data base and shared with scientists and educators worldwide. 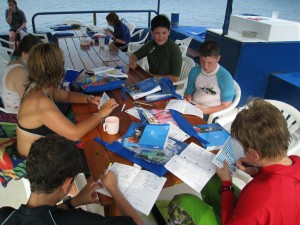 The students spend 8 days on board diving three to four times taking many courses, this years include PADI Open Water, PADI Advanced Open Water, PADI Specialities (Nitrox, Equipment, Wreck, PPB, Drift and Search and Recover) and off course the Reef Check Course with many hours being dedicated to the all important Data Collection.

These young global ambassadors  prove that young people really care about the planet on which they live and the creatures with which they interact. 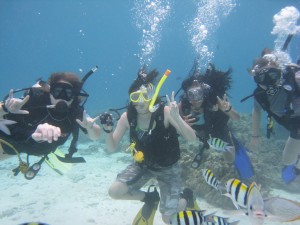 This years charter started this morning, the students arrived in Patong at 6.00pm last night chattering excitedly about the PADI Courses and Reef Checks ahead of them. After breakfast this morning they departed for the 5th Year at Racha Yai…… 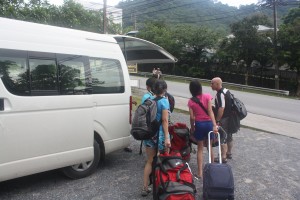 Scuba Cat Diving would especially like to thank the following people: Terry Umphenour (The founder of this Program) Joel Klammer (PADI/Reefcheck Instructor), Paul Adams (PADI/Reefcheck Instructor) Professor Suchana Apple Chavanich, Ph.D. from Chulalongkorn University in Bangkok plus the many others who have helped out during the years including Colette Vroom, Dennis Adams, Renee Robins, Phil Lineker, Margaret McCoy, Gerry Richards, Kathryn Ridley and Mood.

Now we hope other students will follow and, hopefully, help save the Earth’s fragile reef systems for future generations. If you would like to see this same program in your school, please ask your school to contact us or contact us to find out how you can be involved.

Scuba Cat Diving is a pioneer of Environmentally Friendly Scuba Diving in Phuket.

For many years we have actively looked for new ways to help our coral reefs and beaches around the Phuket area. 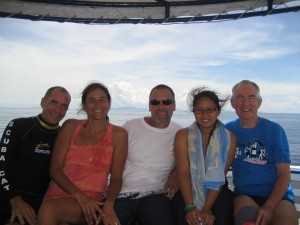 Back  in 1989 Mike, a PADI Instructor made his first of many dive at Racha Yai Island located south of Phuket, Thailand. For many years he continued to enjoy the incredible beauty of the underwater environment.

By now many divers were coming to Racha and it had become the busiest dive location close to Phuket due to its amazing underwater beauty. This was having an impact on the tranquillity of what had been and he realized he needed to find a way to help the reefs sustain these multiple visitors. 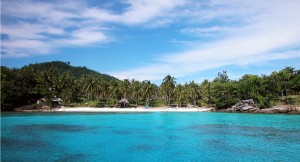 He had an idea, “Wouldn’t it be great to to create a new dive site located a short distance away from the existing reef to help relieve diver congestion and create new habitats for marine life”

Mike found the hull of a confiscated smuggling boat which had been lying abandoned in a Phuket shipyard for years. She was big boat, over 30 metre in length, everything had been stripped from her. Mike could see her as a safe and environmentally friendly artificial reef.

After many hours preparing her for her final voyage and 15 years of shipyard fees paid… she was ready.

Mike was not happy with only sinking her he wanted to take her final journey with her.

“Chris, Jessie and were are standing on the stern of “Marla’s Mystery” clad in dive gear. It seemed only proper that we escorted her to her new home. The filling of the boat was a slow silent, process and we had plenty of time for speculation of what about to happen. The bow appeared to be sinking first; hence we were at the stern. Torches were switched off; the full moon would supply all the illumination we needed.

As the sea poured in the bow of the boat she rose up in the air in classic style, rapidly the stern was rapidly submerged, and us, for the ride to the bottom. There was no turning back ! We were being sucked down with the boat; the vortices produced had me going fins over head just like being in a washing machine. On the first revolution I sensed our support vessel was beening sucked over the sinking boat- sure hoped they didn’t panic, start the engine and turn the propeller guys! Then going down again- making sure to clear my ears. Had been having some ear problems of late; I thought it might hurt. Going up again, no pain, looks like my clearing had been successful. Going down, as helpless as any other piece of plankton adrift in the ocean. How deep were we going? I reassured myself that we are exactly at the chosen location and the bottom would be where we expected. My next thought – was there any chance that I would somehow get sucked under the boat and then crushed like a bug? I hadn’t thought of that before! A quick reassurance, the boat was dropping much too fast; I would never get caught underneath. 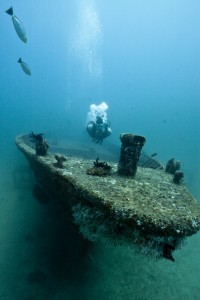 Suddenly there was a loud thud….  the boat crashed into the bottom and my washing machine cycle is over. I turned on my torch and found myself in the middle of a dust storm as the fine sand was thrown up by the impact slowly settles. I saw two other torch beams  close by and we duscovered ourselves on the deck of the boat. Tentative OK signals were exchanged and when the reality of the situation sunk in High 5’s and squeals of delight filled the new reef. A glance at our computers showed the 30 meter ride to the bottom had taken slightly less than a minute.” 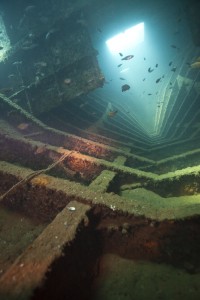 Scuba Cat Diving continue to Dive at Marla’s Mystery when ever possible, the change in her over the years has been incredible. Life is now abundant on her and more and more things appear around her. If you dive it today you will see bath tubs all around her, this is due to the “Bath tub” race Scuba Cat held on her 1st Sinking anniversary and Artificial Cubes sunk to enhance the reef. 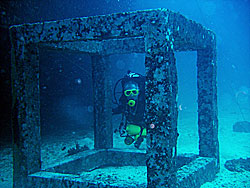